Why mySysters with a ‘y’?

The Greek word for womb (or uterus) is ‘hyster.’ mySysters is a nod to the spelling of ‘hyster.’ Also, in ancient philosophy the letter ‘Y’ often represented a point in life where we have to make a vital decision, usually choosing between virtue and vice. It seemed appropriate somehow.

Why crown icons in the app?

Because halos never got us anywhere.

Why all the swearing in the myNews posts?

Some women are sugar and spice; some women are whiskey and ice. We’re moonshine—transparent, ageless and a bit illicit.

Heaps of existentialist angst with to-do lists we keep losing. But that’s probably not what you want to hear. 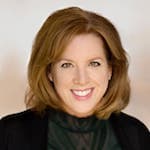 Cindy is a single mom of two daughters. She came up with the idea for a perimenopause app after seeing the period trackers popular among women in their teens and twenties and wondering, “Where’s mine?” A lawyer and writer by trade, she launched a tech startup to develop the app. She then moved the business from Minneapolis, Minnesota to Newcastle upon Tyne, UK and now ‘commutes’ between countries. She has a dark and often inappropriate sense of humor, and her girls describe her eye color as ‘sort of a weird alien green.’ 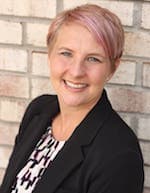 Cheryl married her high school sweetheart and together they have a son and a rescue dog, Oso. Cheryl’s background is in tech and business, which Cindy felt made her the perfect COO. Now, rather than being given corporate projects that may never see the light of day, she’s completely in charge of her own destiny, which is thrilling, terrifying, exhilarating and exhausting. Her hair is short and pink, her laugh is contagious, and her compassion is far-reaching and profound.

Cheryl’s mom once employed Cindy’s sister, which is how the universe brought us together in an act of sisterhood when Cheryl was looking for a new opportunity and Cindy realized she needed to get more than 3 hours of sleep a night because she was getting responses to emails and texts she didn’t remember sending.

Are you medical doctors?

You’re hilarious! This is a self-care and social app and we aren’t doctors. We’re here because we’re looking for answers, too. We searched for a way to navigate a time in life for which we were totally unprepared. We couldn’t find it so we created it and shared it with our friends. They told us everything they wanted changed. We released a beta version and asked women to tell us what they liked and didn’t like—and women happily downloaded it and made suggestions! That collaboration turned into mySysters.

Why a membership fee?

To build a community. We want this to be a positive community of women who support each other. By asking women to be MEMBERS of the community, rather than merely USERS of an app, we aim to build a stronger support network for all of us.

To protect your privacy. Think of mySysters as a lovely private spa and the membership fee as a burly doorman behind a velvet rope. We like to call him Billy. (The doorman, not the rope.) Without Billy, anyone could walk into the spa and eavesdrop on your conversation with your friends. Billy’s presence keeps the trolls and spammers out.

Server Companies and Landlords don’t accept pixie dust. There’s no billionaire venture capitalist throwing millions of dollars at us. Just two women who seem to pee a lot and randomly start shedding layers of clothing while complaining about how hot it is in January. We keep mySysters running by doing everything from delivering groceries to working in a friend’s factory to maxing out our credit cards.

Why should I join mySysters?

Only you can answer that. If our community and mobile platform meets your needs and you want to be a part of it, then great. If not, we’ll be here for you if and when you need us.

How much does it cost?

Less than 1 USD per month.

Who owns the health information I enter into the symptom tracker?

You do. It’s your body and your health.

What happens to my information if I delete my account?

We remove all your personally identifiable information from our databases. If you later wish to retrieve your data we will not be able to do so.

When will an Android version be available?

Can you be more specific?